Time for another update on my #AGameADayInMay exploits, and needless to say it’s been another busy week at work: people still have to regularly foodshop it seems…

Actually, given I’m currently spending a lot less time on MTG Arena than usual, I’ve also been trying to ‘dabble’ this week, and even managed to catch a couple of Virtual Conventions, which seems to be something worth familiarising myself with, given the growing list of cancelled convention news we’ve had this week. On the flipside, it does mean I can pretend to have actually been to Essen this year when the date comes around… lol

Truth be told, it’ll certainly be interesting to see the fallout from Essen Spiel being cancelled… What will happen to all those planned game releases, and what on Earth will W. Eric Martin do with himself if he doesn’t have to slave away compiling another SPIEL preview for BGG this year…?

I took the opportunity to grab a few extra hours sleep on Friday, before writing up last week’s #AGADIM update, and chose to give myself an easy day with a bit of detective work in downtown Arkham. Mythos Tales works in a similar vein to Sherlock Holmes Consulting Detective in that you get a bit of case background, a few pointers, and are then left to chat to several people and explore various locations in an effort to discover answers to a series of questions you’re asked at the end of the case (when the timer has run down – you usually get a set number of days to complete your investigation).

I didn’t do so well in this (and never seem to do at investigation-type games), but felt a tad annoyed that the Professor that I’m up against had access to a supplemental card without having to visit the relevant location to obtain it. Since then, I have discovered that mine is a first edition copy of Mythos Tales and there’s been a bit of Errata since its initial publication, so that immediately made me feel better about this particular loss!

Like Shadowscape last week, this was possibly one of the biggest, most pleasant surprises this week. I reviewed it several years back (Master of Orion review) and played a lot of Master of Orion when it first released despite my crushing disappointment at how much I felt the license had been wasted with this design, but I can’t pretend I didn’t enjoy it, nonetheless.

The game itself is akin to a multiplayer solo tableau builder, which makes it relatively easy to adapt to solo play, so I used my own Solo rules for this game, and am justifiably pleased with how well they work. You can find my solo rules for this, here, btw: Master of Orion solo rules. And I enjoyed playing it so much I immediately had another go, just for good measure you understand, which is a very promising sign, surely? This’ll definitely get to see the light of day a bit more often, I think… and deserves to, imho.

Returned to an old favourite today, and played several games of this, all against Rhino, still. Thor lost out both times because he’s just hopeless at Thwarting schemes, Black Widow scraped a win (and is pretty cool, anyway, FYI), but I was particularly pleased and impressed with the first outing of my Doctor Strange hero pack: he is a one-man destructive force of nature, and even has his own special ‘Invocation’ deck which is hands-down just super awesome, frankly!  Yup, I immensely enjoyed playing this guy, today!

Possibly one of the bigger games this week in terms of depth, I had never tried the solo game before now, and much as I quite enjoyed this, didn’t realise until afterwards that it had taken a good 90 minutes or so to play! 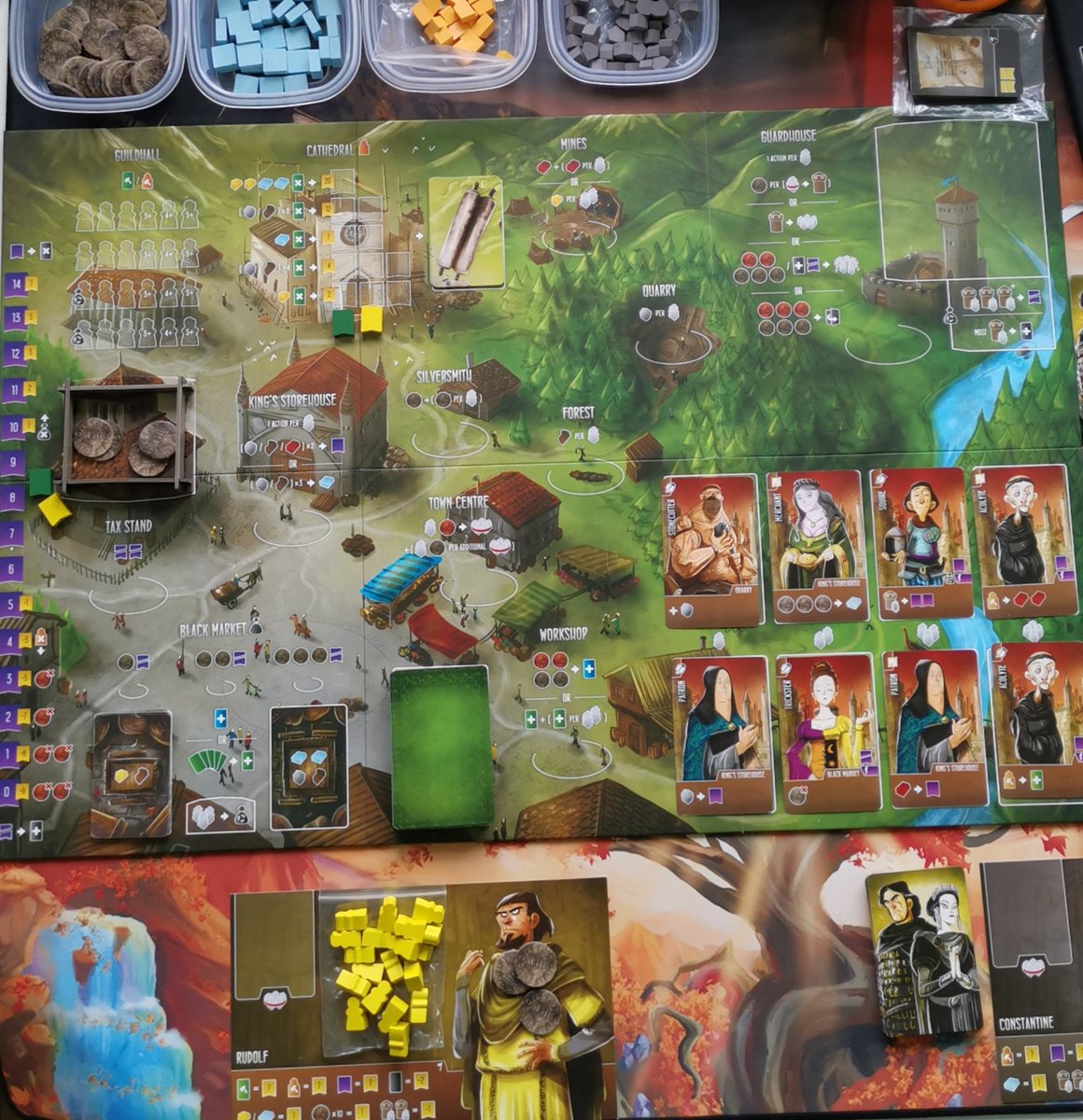 On the one hand, it’s nice to know that the time flew past without me noticing, but on the other that’s a lot longer than my personal ideal for a solo game, and I couldn’t hand on heart say the pay-off was worth it. It wasn’t ‘bad’ or even disappointing, it just felt relatively ‘ordinary’, I guess…

I played Arkham Noir #1 in the first week of #AGADIM (Week 1 of #AGADIM) and rather liked the mix of puzzle and cardplay, so was quite looking forward to getting this one to the table as well. I’m pleased to say I wasn’t disappointed.

Arkham Noir #2 adds a couple of extra cards and rules over and above the first case, and for me at least, these help to improve the game: they give you a bit more to focus on and plan with, but also open up a few other avenues when it comes to making decisions about what cards to keep and which ones to let go. The addition of a bit of colour is also very welcome. I definitely enjoyed playing this even more than I did the first game, and am looking forward to seeing Case #3 when it finally releases (later this year, I think).

I needed something a bit easier to tackle today ‘cos I was a tad knackered from working all week, so I opted to get this one back to the table and try again. You might recall that last time I tried this fiendish puzzle-type game (also mentioned in Week 1 of #AGADIM) it was plainly obvious that I was rubbish at it! This time round I chose to give myself a bit of leeway and started both games with 2 Shields (just to see if this would give me a sporting chance, tbh), and have to say it proved a much better experience with the help of these, and at least I was made to feel like I had a chance to actually win this time!

Leaving Earth is another game I was looking forward to getting to the table this week (this whole month, actually), but I am well aware that it isn’t everybody’s cup of tea given the heavy reliance on some maths and what amounts to a 40+ page rulebook that looks akin to a student’s science textbook!  I find it a particularly pretty game, and think the pieces and production quality are generally excellent (I reviewed it more thoroughly here: Leaving Earth review), but it’s undeniably quite heavy going and is a real time hog, especially if you’re having to check and recheck stuff with the rulebook, which does tend to happen regardless of how familiar and confident I might feel about playing the game.

I did eventually win this one (it took 2.5 hrs though!), with just 3 years / turns to go before the game would have ended, anyway, but I also felt a bit mentally drained afterwards, so it’s not the type of title that’ll get played a lot, tbh. It was still a decent game, but just a tad heavy on ye olde braincells, really!

Any Other Business, Squire?

Not really much else to report, although I will probably be knee-deep in the production and layout of The SPIRIT #9 over the next few weeks, so it’ll be interesting to see if that can derail my #AGameADayInMay plans…