It sounded like a good gig: play at least one ‘boardgame’ every day in May. Yeh, it might be a bit of a challenge, but it’ll help fill the time during Lockdown, I’ll get to play loads of games that might not otherwise see the light of day for a good few months, and it should be a good crack, right? How hard could it be? Well, here’s the thing…

The first 21 days were a bit hit and miss, but mostly positive experiences: I played loads of games, rediscovered my love for some old favourites that needed a garden plough to rake the dust off their boxes, and in general had a wail of a time, to be fair. Incidentally, I’d go so far as to suggest that rediscovering Shadowscape and Master of Orion were two of my biggest highs this month, and ditto enjoying the genteel beauty and simplicity of a game like Koi, too. But…

Y’see, this week has been TOUGH!  Working 5-6 nights a week, nothing much has changed work-wise for me, and I’ve never really been one to need that much sleep, anyway (sleeping is for wimps, right?), but this last week I have found myself feeling knackered, lethargic, ‘lazy’, and just struggled for time on soooo many fronts!

When I started this, I never once figured I’d get to the point where I’ll be filled with so much dread at just the thought of having to play yet another game, or that I’d be cowed into a gauling sense of resignation about doing so, but sure enough, that’s happened at least 3-4 times this week!

Setting aside the unexpected mental stress and pressure this is putting on me (self-inflicted, I know), I think I’ve got to that point where sheer bloody-mindedness is the only thing that’s going to drag me over the finish line, now… Rest assured, it’s a done deal and I will be seeing this through to the end, but Jeez, I’m not going to put myself through this again anytime soon!

I have actually played this wargame before, and wrote an extensive playthrough about it here: Rogers’ Rangers Playthrough — I enjoyed it back then, so had no real worries about playing it again, tbh.

It’s another one of those mini games from Decision Games, and for people like me who are still taking their first tentative steps into the big bad world of wargames, it’s a bit of a blessing: simple mechanics, a set of rules that isn’t too demanding, and a game that can be picked up and played within an hour or so. Of course, I chose to play the campaign again (which is 4 games/scenarios strung together, or Missions as they’re called here), and actually found it quite easy to complete – mind you, it’s worth noting that this one is a lot more forgiving than many of the other games in the series!

This was a very recent release, but my interest had already been piqued when I discovered it was a portable and quicker version of the base game (a little bit like the Ticket To Ride: London and New York pocket versions of TTR), so I snagged a copy of this as soon as I was able to.

I had to adapt the solo rules from Pandemic: Fall of Rome once again, but as somebody correctly pointed out: Pandemic is just a multiplayer solo game anyway, right? Ouch.

The main differences between this and the original is that it’s a smaller map, there are less diseases to cure, only one Research Station, and only four roles to choose from (which feels a bit miserly tbh). Speaking of which, combining the ability of The Medic to clear all the cubes of one colour in a space (as a free action for cured diseases) with the special ability of The Dispatcher (allowing a character to jump to the same location as other roles) makes these two a particularly powerful combo. And the special ability of The Researcher role (giving City cards to other players in any location) is pointless in a purely solo game, so playing this using the solo rules means you have to play with The Medic, Dispatcher, and The Generalist (5 actions per turn instead of 4) roles. I should add that whilst the physical quality of the disease cubes can vary, the meeples, Infection Rate, Breakout, and Cured Disease markers are all particularly chunky and gorgeous in this version!

I did enjoy playing this, and it’s certainly quick – I played it through twice in the space of an hour quite easily.

Weekends tend to be reserved for family in this household, so I needed something quick and dirty to fill today’s spot, and Awkward Guests was perfect for this – the App does all the legwork for you, and all you have to do is spend points to read the cards it tells you to and make your deductions from those: no messing, no card-sorting, no hassle at all, really. And of course, it’s still quite challenging (depending on which level of case you choose to take on).

I hit a bit of a milestone with this game, ‘cos it was the first time I’d tried one of the scenarios from the Green Goblin Expansion pack. I opted for what looked like the easier scenario —’The Mutagen Formula’ had no extraneous rules to worry about— and chose to tackle it with not one but two of my favourite heroes: Doctor Strange and Ms Marvel.

After an epic 2½ hour confrontation (yes, really, it took that long, but I did also manage to throw together an evening meal for the family in that time), the city finally succumbed to the green marauders, but those heroes put up one helluva fight, and as powerful as Doctor Strange undoubtedly is, it was Ms Marvel that took on all the goons, at one point facing off against SIX of them at once: what a badass she is!

Great fun, as always!  Marvel Champions continues to be one of my favourite games of the year (and was my favourite last year, too) and has definitely proved to be my ‘go-to’ game for this whole #AGADIM challenge.

I only recently found out there’s a new expansion for this on the horizon, too: The Rise of the Red Skull will introduce two new hero sets as well: Spider-Woman and Hawkeye. I’ve always liked Hawkeye, and it’ll be nice to have him fighting side by side with Black Widow once more… Ooooh!

Day 26: Tues 26th May — Ancient Civilizations of the Inner Sea

Now this is one of those games I was actually looking forward to getting to the table this week, but at the same time genuinely dreading the amount of time it might take to play…

Ancient Civilizations of the Inner Sea (ACIS) is an epic GMT game and probably has more ‘take that’ per square foot of card than you’ll ever want to inflict on another human being, and it’s not a short game, either: playing this with 3-4 players racks the playing time up to at least 4-5 hrs or so. The Playbook included in the game is also impressive: a whopping 60-page beast packed to the rafters with scenarios suitable for all manner of player counts (up to a maximum of 6), including quite a few aimed at solo play, so would they offer a bit of a respite from all the grief those cards can inflict on other players? Not bloody likely!

I chose to play the Fall of Rome II scenario (recommended for your first solo outing), and immediately found myself under the cosh from marauding barbarians the NPC I was up against had set upon me. Twice! It didn’t really let-up after that, and the NPC went on to ransack the gold from a couple of my cities within the first few turns…

I won out in the end (and it took 3 hrs!), but I do have my doubts about some of the scoring, because the only reason I won is because I successfully held onto the gold in my home city of Troy: a place the NPC couldn’t quite reach before the game ended, despite throwing a couple of waves of barbarians at it.

I’m not sure if ‘fun’ is quite the right word I’d use, but I certainly enjoyed it as a learning experience: now I’ve got a much better idea of how the NPC(s) work, at least!

Mythos Tales is an investigation-style game similar to Consulting Detective, and despite a terrible track record with these, I decided to push on and try the 3rd case in the book (there are 8 in total), and am very glad I did so. 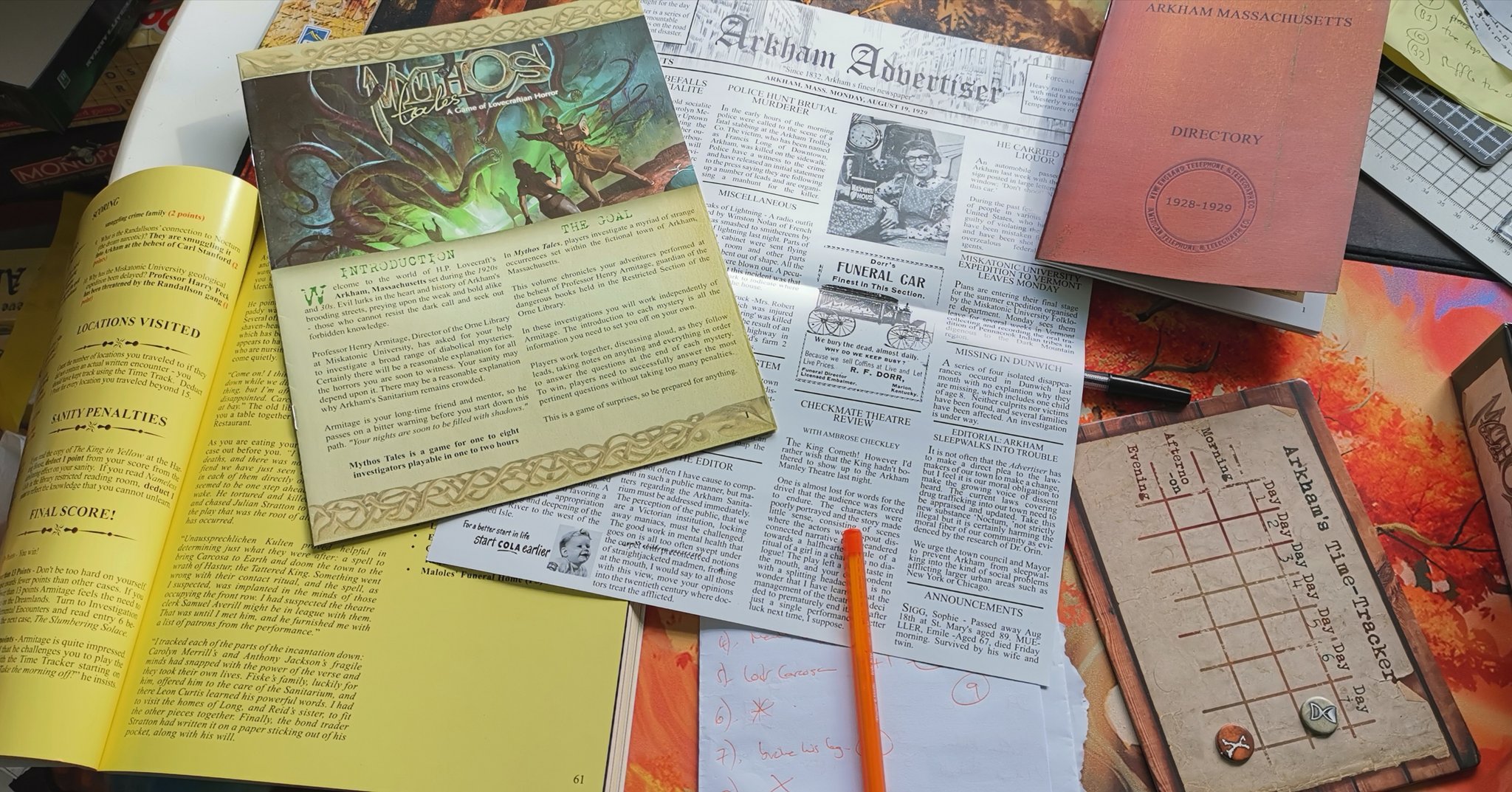 I managed to get a lot further than I usually do this time, discovering answers to most of the questions you’re asked about the investigation when it finishes, but also suffered a few scoring penalties and mental scars from the scenes / paragraphs I had encountered along the way! These Arkham investigations are certainly growing on me, though…

I wasn’t expecting to get another mini game from Decision Games to the table quite so soon, but the Mars setting for Phobos Rising appealed to me a lot, and despite a somewhat dodgy combat system, it was refreshing to play one of these wherein the emphasis wasn’t necessarily on the fighting for a change.

In Phobos Rising you’re having to juggle your resources and people a lot more, and the core game revolves around making successful challenge rolls against the skill and characteristics of your team and taking over installations that enhance your chances for future challenges. It has a pleasantly different ‘feel’ to the other games in this series, and I can hand-on-heart say I really did enjoy playing this all the more because of that…

All Your Games Are Solo-dified!

While it’s very interesting to play a shed-load of solo games and make gameplay changes to core games to accommodate solo play, it’s a whole different ball game to design your own. Uncannily, I managed to work on a small, solo-orientated 18-card single deck puzzle game I wanted to design this week, with my spurious reasoning being that when it’s nice weather outside, I’d like to be able to sit in the garden and play a game that doesn’t need any form of physical board or table space to play…

To be fair, the theme for my RGB Light Challenge game is a bit rubbish, but it’s a work-in-progress and something I designed more as an experiment for something potentially deeper, and so far I am really pleased with how it plays, and the fact that you can pick up where you left off at any time is a definite bonus. And what’s more, you can print out all the cards using just a single double-sided A4 sheet – that’s pretty cool, right?

You can download the Print’n’Play file here: The RGB Light Challenge single-deck game