All Your Games (and Mental State) Are Us!

Ah yes, an update on week 2 of my solo gaming marathon/challenge for this month… That image above is a fair representation of my zombified state of mind for a couple of days this week — y’see those red eyes and all that busy-ness in the background?  Turns out it’s not so easy to motivate yourself to play games when you’re knackered and in need of a few precious hours of sleep – who would’ve thought, eh?  [The image is of Dr Octavius, btw, one of the bonus Executive Officers from the Barrage upgrade collection!]

Friday proved a very busy day for me, given that I put a new PSU into my PC that morning, mowed the back and side lawn (there’s a lot of it), and replaced nine fence panels in the garden, so choosing to play Marvel Champions felt like a pleasant reward for successfully completing the first week of #AGameADayInMay. I did a blogpost as well, of course! This time on my MC channel (sic), Captain America went up against Rhino (using The Break-In! encounter set), and crushed him quite easily with the aid of the Avengers Tower support card and several allies, including Wonder Man. More importantly, it was good fun, too, which is one of the reasons I enjoy getting this to the table so often.

Awkward Guests was one of my surprise favourite games of 2019, and playing it solo is arguably a very easy and relaxing process: run the App, let it choose a case, and then it pretty much guides you through the rest. You start with 50 points, it tells you what cards to read, let’s you ‘buy’ more cards each turn using these points, and the process carries on until you either solve the case or run out of points and have to hazard a guess. I played a total of 4 games (because they’re very quick when you don’t have to dig out all 70 cards at the start of the game), and am clearly a pretty crap sleuth, because I only cracked the last one by hazarding a guess from a choice of two remaining murder weapons! Again, though, I enjoyed playing this a lot, which serves as proof enough that this game has some serious longevity built into it.

As an aside, I also played a load of XCOM: Chimera Squad today, and have to say this game was an absolute steal at under £15 on Steam — it throws you straight into the action with every scenario and encounter, making it quick and dirty, but also heaps of fun, too… 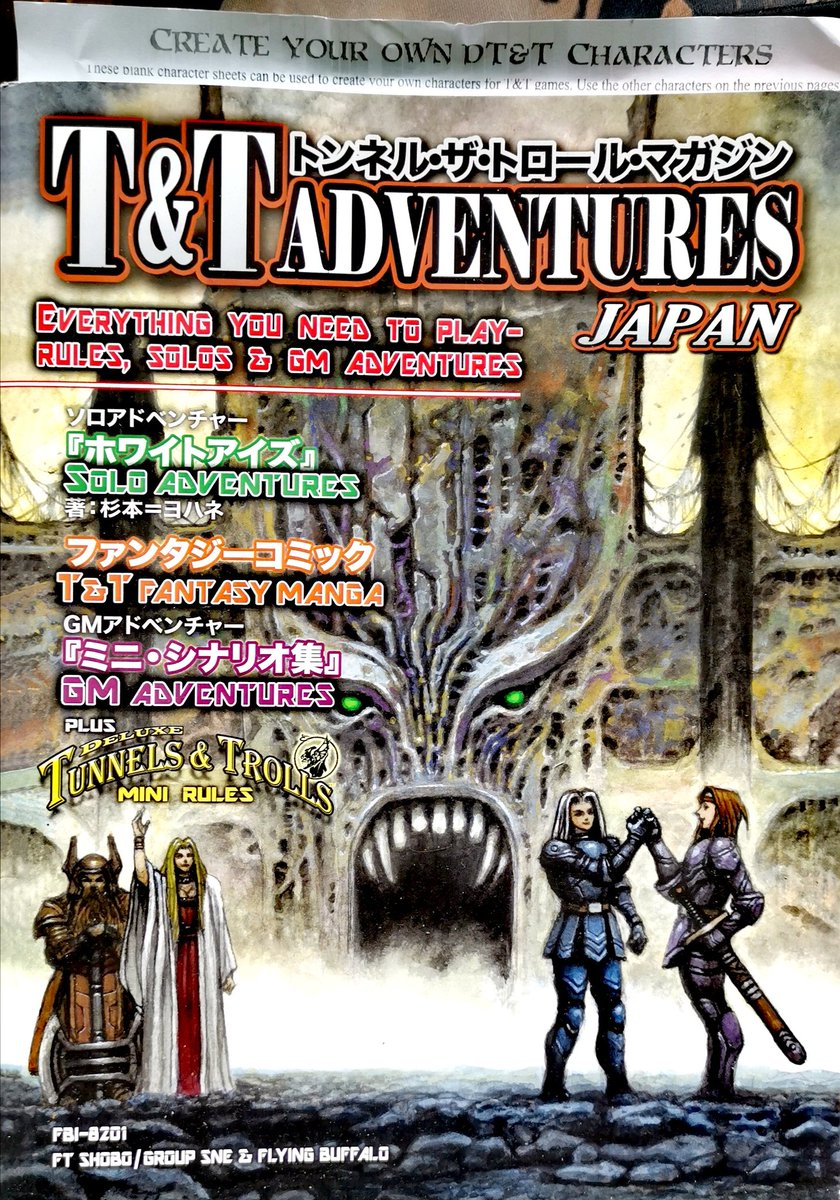 Time felt really tight today, and I think I was feeling a tad run-down, so opting to play something short and sweet seemed like a good idea, and given that it has literally been decades since I last tried it, I opted for a solo Tunnels & Trolls game (using the basic system). As it happens, although The Secret Order of the Eye scenario had a few innovative extra bits (such as NPCs that you can interact with in different ways that affect later outcomes), both times I played through it (with different characters) proved disappointing: the random nature of the encounters and the wide-ranging skills and abilities needed to progress made it an exercise in frustration if I’m being brutally honest. It’s a shame, because I was quite looking forward to playing this again, and it now looks like I’ll be happy to stash this away for a few more decades!

After the disappointment of yesterday playing T&T, this was a game I was genuinely keen to get back to the table. It’s been a while since I last played Shadowscape (and I reviewed it back in 2017: Shadowscape and Shadowscape: Deeper Dungeon), but Wowsers… what a slick and impressive little thing this game is! Aside from the gorgeous artwork and very clever dungeon movement system for the encounters, the mechanics and rather neat gameplay makes this a real winner. I had genuinely forgotten how much I liked this game, really did enjoy playing it again, and have also moved it to a more prominent place on my games shelf so I can remember to consider taking it along when things finally get settled and ‘gaming with real people’ becomes more than just a pipedream… It’s a tiny box, but it packs a real wallop imho. As you can probably guess, I was so impressed and pleased with this one, and had a grin on my face akin to the Joker’s throughout. Absolutely loved it.

Had a double whammy today, because the replacement wheels and extra bits for Barrage also arrived: some extra machines and excavators I’d ordered, wooden blue water drops to replace the ghastly plastic ones originally included in the box, a printed solo manual, and a couple of extra Executive Officers (with interesting special abilities, it must be said). The timing of this in terms of the arrival of a printed solo manual couldn’t be more perfect for this month, but the solo rules for Barrage do look very intimidating, it must be said…

And now for something completely different, as they say, because Koi sees you playing the role of a Koi fish trying to gobble up as many dragonflies and frogs as possible on what could be one of the prettiest boards you’re ever likely to see…

The premise is simple and easy, and the gameplay pretty basic, but it’s quite fun nonetheless: you draw action cards and play the ones you want to move your fish around the pond and eat stuff that spawns throughout the game. Weather cards can influence what happens each turn, but otherwise it’s all straightforward enough. I won my first game on Easy level quite comfortably, so thought I’d try it on Expert level and got suitably thrashed by the AI… To be fair, this isn’t the sort of game that will make it to the table often, but it was fun, and that remains the raison d’être for this whole process, so I’m not going to knock it for that…

A combination of tiredness and a lack of chutzpah may have crept into my week at this point, and although this mini-wargame from Decision Games was another title I was looking forward to playing, ultimately it proved to be one of the most disappointing: the system was prone to too much randomness with die rolls used to determine pretty much everything throughout. Despite what I thought was quite appropriate theme-wise (Vikings settling and pillaging Europe, of course), by far the most annoying aspect was having to start the campaign game with your leader at Edda level 0: a number of Ops cards (turn event cards) require a successful saving roll against this value to avoid combat and otherwise gain some kind of benefit (“roll a d6 and if it’s less than or equal to your Edda level you succeed”), which basically meant my meagre starting Viking forces got crushed and battered by marauding defenders almost every turn, ‘cos there was no way I was rolling less than or equal to ZERO on a d6 anytime soon! Looking back, I didn’t stand a chance and the constant dice-rolling did leave a sour taste in my mouth, but I might yet try this again with a more sensible starting Edda level and give it a second chance. That won’t be anytime soon, though! 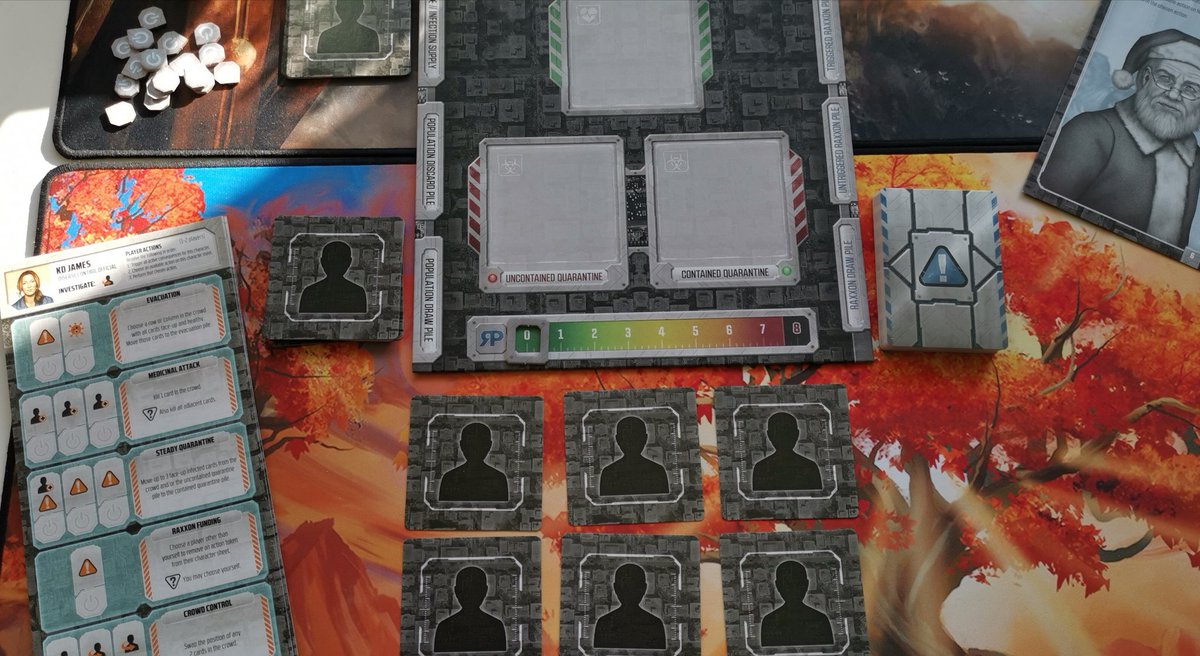 Raxxon is a game I bought just before my 2019 KS boycott, and although I’d say it’s okay, it’s not a game that is likely to get to the table very often, and probably won’t remain in my collection down the road. Based loosely on Dead of Winter, battling a zombie virus outbreak might feel a bit topical just now, but it’s something of an acquired taste I think. The game is also quite hard to beat whether you play it solo or with other players, and although you feel like you’ve got a fighting chance at the start, come the last couple of rounds the Infected are like a swarm of locust. It was suggested to me that I try it again but playing as two characters instead of one in the solo game, but I can’t see this changing the net result: another ass-whooping…

Anything else going on?

Actually, the rest of the week was a busy one, because I was at work for most of it. I also spent the majority of my Thursday trying to upload all the necessary files and related stuff to implement Aliens Ate My Planet! on the Tabletopia online platform. Bearing in mind that I’m relatively new to all this, I got stymied by what I think is a pretty rubbish UI interface for creating the initial set-up, etc. — each player has the same starting deck of cards in Aliens, and draws 5 of them into their hand for the first turn, which seems to be something the system can’t cope with… WTF?

Ahh well… the latest set release/rotation cycle for MTG: Arena is also rapidly losing its appeal for me right now (some decks feel ridiculously overpowered), so at least this isn’t swallowing anywhere near as many hours of my time as it had been these last few months. Thank ye gods for XCOM: Chimera Squad is all I can say!